We prepare photon pairs via the nonlinear optical process of spontaneous parametric downconversion (SPDC). The process requires us to pump a nonlinear crystal with ultraviolet light. Occasionally an ultraviolet photon decays into two daughter photons, obeying the rules of energy and momentum conservation. If the orientation of the nonlinear optical crystal is chosen appropriately, two such possible decay processes become indistinguishable and lead to quantum correlations in the polarization of the daughter photons.

A nonlinear optical crystal pumped with ultraviolet light of a single wavelength leads to a broad spectrum of downconverted light. An example of such a spectrum is shown in the picture below. A continuous range of colors from red to blue is emitted, and each color occupies a certain circle. This circle corresponds to a particular emission direction due to momentum conservation. Energy conservation ensures that there are also corresponding infrared circles for each of the visible colors.

If we pass the downconverted light through appropriate filters, we can see both of the daughter photons (called "signal" and "idler"). In particular, we can choose to filter light that is exactly at twice the wavelength of the ultraviolet pump. In such cases, we are said to be choosing the degenerate downconverted wavelength. In the diagram below, the emission angle of the degenerate photons are shown. Photons of one polarization, ("signal") are emitted in only one particular set of angles. Photons of the other polarization, ("idler"), are emitted in another direction, corresponding to momentum conservation. Signal and idler photons have orthogonal polarizations. we do our most interesting work by collecting the light that is emitted from the intersection of the two directional rings. It is light from these regions that give rise to polarization-entanglement [1]. 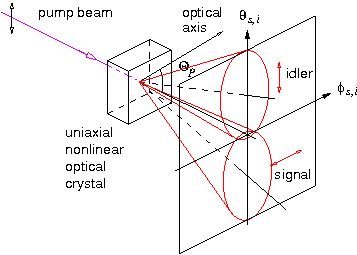 By using filters, polarizers and a CCD camera, we have put together three short movies to illustrate the concept of the downconversion "rings". In the movies below, the camera is always looking at downconverted light that has been filtered to be degenerate.

These photon pairs are also highly correlated in their spectral degree of freedom. As they are derived from light with well-defined wavelength, energy conservation becomes obvious in wavelength correlations: the coincidence spectrum of such a photon pair shows two distinct lines corresponding to the two wavelengths in the Argon ion laser used for this experiment.

While entangled photon pair sources based on non-collinear type-II parametric down conversion has been one of the most successful experimental workhorses in this field since its conception [1], it was not clear for a while what the limitations in terms of spectral and absolute brightness was one could expect from such sources.
In a more theoretical work, we were able to come up with a closed expression of the expected pair generation rate for such sources [2]. In this article, the photon pair generation/collection rate into single mode optical fibers, which allow a clean propagation and spatial mode shaping as well, is calculated from straightforward field quantization of modes with a Gaussian spatial profile, overlapping in a nonlinear optical crystal. Apart from a very basic description of the nonlinear optical material, we only make use of Fermi's golden rule to come up with absolute collection rates.
As a result, we found that the latest implementations of the above described entangled photon pair sources operate close to the theoretical optimum, and that for increasing bandwidth or spectral brightness, other avenues have to be followed.